PINK: The new ‘it’ colour & how to use it to awaken your home office

Posted by The Rocca Sisters & Associates

Have you thought about the office space you work in? Is it small, cramped, closet-like or big enough, yet dull?

Researchers say that the kind of office space you work within can greatly influence your health and productivity.

So for today, we thought we’d look at how to create an office space that inspires you to work at your ultimate best! Houzz.com, one of our go-to sources for the hottest home designs, sure got it right with their featured article today: “Room of the Day: Proudly Pink in San Antonio.”

In it home designer Jamie Hernandez’s office space is a complete mess. After finally saving enough money to decorate, she decides to use bold patterns that inspire her.

A deep pink is used on the walls, (Benjamin Moore’s Peony) which safely takes away any notions of Barbie. This type of pink is a perfect shade, so sophisticated even men like it.

Comments Off on PINK: The new ‘it’ colour & how to use it to awaken your home office

The U.S. Open: The Undeniable Perseverance of One Burlington Athlete

Posted by The Rocca Sisters & Associates 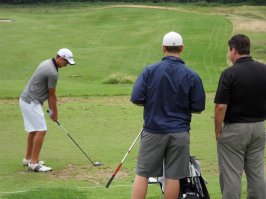 Drive and resiliency are at the core of what has led Sean Bozuk to the final qualifying rounds to the U.S. Open Championships. The 20-year-old Burlington native is among over 10,000 hopefuls worldwide, who is representing our community on the journey to golf’s second-oldest major championship.

It’s the relationship that Sean has with his Dad, Daniel Bozuk – which he attributes to his successful entrance into the exciting world of professional golf.

For the Rocca Sisters, it’s always been our passion to support the community of Burlington and help it to continue to grow and prosper, whether it be fundraising for local charities, for health-related causes, and supporting our local talent and community ambassadors such as Sean. Daniel is a valued Licensed Sales Representative with the Rocca Sisters & Associates and we’re proud to watch him support his son’s big dream of qualifying for the U.S. Open.

Sean’s first golf game was at age 7 and Daniel has been there for him every step of the way since, often times attending national tournaments and being his caddy. “I’ve always told my son, that if you put effort into anything you do, you will succeed,” comments Daniel.

But it hasn’t always been an easy road to success. Sean faced challenges as many other young athletes do. In his younger years, he was overlooked by golf scouts seeking older talent. Sean did not let that stop him. He worked hard, often from sunrise to sunset to improve his golf game.

Now as the U.S. Open approaches, Sean is thrilled to be representing Burlington on the world stage. “I’ve grown up in Burlington. It’s been a warm and welcoming place for me and I’m proud to say that it’s my home,” says Sean.

Getting through the local qualifying rounds, which took place from May 2 to May 19 was an exciting and dramatic process, which saw 10,127 golfers from around the world pursuing their chance to play in the U.S. Open.

In his grouping of 85, Sean came in first place, shooting at 66, and now moves onto the sectional qualifying round – the last before the U.S. Open. Less than 1000 golfers make it into this final process, played on 12 sites.

Players who survive the sectional qualifying round will have a chance to play alongside some of the biggest names in golf today. And with the added element of back-to-back championships, competitors who make it to the U.S. Open, to be held on June 12-15, in the Village of Pinehurst, NC will be a part of history.

At the Rocca Sisters & Associates, we congratulate Sean on his remarkable success during the qualifying rounds and for being an incredible role model and ambassador for our community. We’re cheering him on, all the way to the U.S. Open Championships and beyond.

Posted in What's On

Comments Off on The U.S. Open: The Undeniable Perseverance of One Burlington Athlete